Caili started dancing in her native Guam under the direction of John Grensback and Bettina Sanzotta and moved to New York City to continue her classical training at Ballet Academy East. 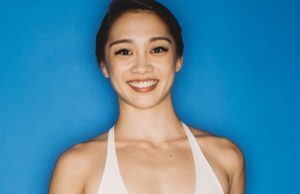 She was a trainee with Richmond Ballet and an apprentice with Charlotte Ballet (formerly North Carolina Dance Theatre), before joining First State Ballet Theatre under Pasha Kambalov for three seasons. During her training, she performed works by George Balanchine, Marius Petipa, and Malcolm Burn, among others.

Caili has had to pleasure to choreograph for konverjdans, Columbia Ballet Collaborative, DanceWorks Chicago’s ChoreoLab, CelloPointe, and St. Paul’s School. Her piece Fancy Me was performed at the Vail Dance Festival in 2018. Caili was nominated by BalletX to serve as an Artistic Partnership Fellow at The Center for Ballet and the Arts at NYU during Summer 2019. She is very excited to be choreographing a new work for BalletX’s Summer Series 2020.