BalletX volunteers are an essential part of our operation, helping the BalletX team run events, sell merchandise, distribute promotional materials, and more. We recently sat down with Super Volunteer Matt Soojian to hear from one of the best!

Hi there, my name is Matt. I live in Philly, and I grew up in West Chester, Pennsylvania. I started taking dance lessons at a young age and have never stopped dancing since. Once I reached high school I realized I wanted to pursue dance professionally. I was taking classes at The Rock School West, participating in Footwerx Tap Company, and attending the Creative and Performing Arts High School. From there I moved up Broad Street to University of the Arts and graduated with a BFA in Ballet Performance and was awarded the LaVaughn Robinson Tap Award in my class. Since then I’ve been performing and choreographing with local companies in the Philadelphia area and have become an Assistant Choreographer of Footwerx Tap Company. I’ve had the pleasure of performing on a few Broad Street stages including The Wilma Theater, The Suzanne Roberts Theater, and The Perelman Theater at the Kimmel Center. I’m also an aspiring choreographer and looking to create more pieces to build my own repertory of work. So far, I’ve had dances premiere at festivals here in Philly and in NYC. I’m excited to continue my choreographic journey and find my voice among the many artists in this city.

The first time I experienced BalletX was back in 2009 for their Fall Series. One of my ballet teachers at The Rock School West had seen this particular show and recommended it to our class. She was very enthusiastic about the dance scene and often told our class about dance and theatrical shows she had recently seen. She described the company as a group of dancers who branched off of Pennsylvania Ballet to create their own contemporary ballets and help elevate the definition of what a ballet could be. With that kind of description, I was immediately sold on seeing the show and wanted to check them out for myself. I was blown away with what I saw and had never experienced a show like it before. Seeing three completely unique balletic voices in an evening and having a company of dancers execute them flawlessly was incredible. The fact that the Wilma is such an intimate theater added to the experience and made each work feel so much more personal. It changed how I viewed dance forever.

Was there an epiphany moment where you immediately realized you wanted to become a volunteer, or did it happen slowly over time? Can you explain in detail how it all happened.

I knew I wanted to be involved with BalletX in any shape or form after seeing my first show in 2009. I saw that they had volunteers working the merch table and always thought that would be a fun way to get my foot in the door. I’m a sucker for a cute graphic tee. Unfortunately, I was too busy bouncing between schools to really commit, but I always wanted to sign up. Fast forwarding two years later, I was a student at UArts and had BalletX’s Artistic Director Christine Cox as a professor there. At the time, Christine and the dance department offered an internship with the company to a select number of students. I was fortunate enough to make the cut and spent part of my summer doing whatever jobs Christine needed done as well as taking class with the company. I got to watch the company work in the studio during rehearsals and see first-hand how a world premiere is produced from start to finish. It was amazing watching choreographers like Annabelle Lopez Ochoa create Castrati, and I learned so much from that experience. It only motivated me more to support the company and be a part of what they were trying to accomplish. After that internship I stayed in the volunteer network and the rest is history.

Fun Fact: You can spot me in Gabrielle Lamb’s film, en dedans, which was filmed that same summer.

Can you tell us the range of volunteer projects that you’ve been tasked with, and what volunteer experiences you have enjoyed the most and why.

Whatever you consider to be a wide range, that probably fits what I’ve done. Everything from being involved with live performances to behind the scenes work. I’ve been behind almost every table at some point or getting anything from point A to point B.

The experiences I enjoy the most are ones where I get to see audience members or donors react in real time to the company performing. I know that’s an oddly broad definition. BalletX attracts a wide audience and each person experiences a ballet or performance differently. Getting to add to that experience and also hear how a performance has impacted them or made them think is really gratifying. Dance is a dialogue between artists and audiences, and that dialogue doesn’t just stop when the curtain closes.

Being a super volunteer, it’s been said that you’ve “seen it all”! Can you give a behind-the-scenes example of the funniest or wildest thing you’ve seen as a volunteer?

Oh man, where to begin? Every event has its own inside jokes, so you just have to sign up for something in order to get in on the fun. There have definitely been things that have tested my capability in customer service.

One of the most unique things BalletX has taught me how to do is open and pour wine on a moving bus and not spill on anyone. You’re not living until you’ve accomplished that multiple times.

One thing that goes down in the history books for me is when there was an unavoidably tight venue schedule with one of The Premier Party fundraising galas, and we had to set up everything in about an hour or less. Think about that. You have about 50+ auction items all with clipboards, food tables, check in table, DJ and live musicians, wine vendor, and elaborate decorations that the events committee has curated; all an hour before we open the doors to the biggest fundraiser the company has all year! It was wild and some of the finest teamwork I’ve ever experienced. You can never accuse the BalletX team of not getting the job done.

What would you say to someone considering volunteering for BalletX? Why should they do it?

Just do it. Seriously… Don’t wait to sign up. Just go for it.

BalletX offers things that no other dance company in this city does. There a lot of dance companies here in Philly and they offer some incredible things. I can honestly say, BalletX is completely unique, and you will not find anyone else creating the work that they do. When Christine talks about putting out world premieres every year, it’s no joke. The company delivers every single time. And you’re not just seeing work from local choreographers, you’re seeing new choreography from artists nationwide and internationally.

Who would not want to be a part of that? You’re exposed to so much from seeing performances, to interacting with other artists and audience members. You are part of a community that is hungry for new work that pushes the boundaries of what ballet can be. If you have even the slightest interest in volunteering, don’t wait. Jump on the opportunity. BalletX is a big family and they want you to be a part of what they’re doing. No matter what volunteer job you sign up for, it is always appreciated. Your investment never goes unnoticed. Come be part of a dance family that really cares. I promise you’ll enjoy the journey they’re taking.

BalletX is always accepting new volunteers, and is currently seeking volunteers for the upcoming 2018-19 season-opening performances of Fall Series 2018 at The Wilma Theater, Nov. 28-Dec. 9.

Click here to learn more about becoming a BalletX volunteer today. Who knows, you may just be assigned to work alongside Super Volunteer, Matt Soojian – thanks Matt for all you do! 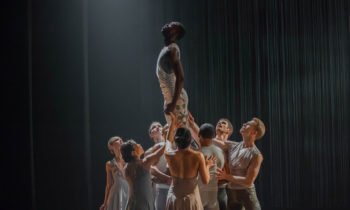