How many celebrated choreographers are also playwrights and theater directors who stage powerful productions of Ibsen? Or creators of puppet theater? Or artists whose physical theater humorously incorporates nonsense language? Just one choreographer is all those things—Jo Strømgren, whose newly-commissioned work, The Letter, is featured in this Winter Series. Strømgren says that working in so many mediums runs contrary to the usual way of building a career. That, according to him, is “to stick to your style and make sure people know what your trademark is.” But he says doing that would mean “missing out on a lot of fun!”

Even though he trained in classical dance in his native Norway and he has made ballets for many companies including the famed Royal Danish Ballet in Copenhagen, Strømgren doesn’t want the limitation of creating work based on one technique. Instead, he observes that in just one section of his new work, you can see “a bit of salsa, a bit of jazz, classical.” He also finds “something tribal about it.” Directing the BalletX dancers, he speaks softly, his shoulders hunched with concentration and tall frame gawky as he demonstrates fresh moves. The act of making is serious fun, and the sections being worked on are full of quick and unpredictable changes: A crisp line of dancers morphs into a chaotic morass. Intricate partnering freezes in neo-classical shapes. Strømgren lets every part of his dance knowledge bubble up, allowing viewers a wide range of associations.

Christine Cox, BalletX’s Artistic and Executive Director, asked Strømgren if he’d use his eye as an “outsider” to make a piece on current American themes. He had long collected American folk music, but never had a chance to work with it, so that music became his starting place. Eventually he narrowed in, gravitating to the blues. The Letter features four songs by Josh White, the late folk-blues innovator and activist, and two by C W Stoneking, an Australian with American parentage who absorbed early blues stylings and created original material from that legacy. Strømgren says “the main rule was to use that kind of music and do choreography that’s contemporary, that doesn’t play along with the music, but to see if those two can merge together and create a new sense of cool.” Two more elements layer into The Letter: costumes modelled on Norwegian black metal band fan outfits and “and a voiceover text with a letter, hence the title of the show,” according to Strømgren.

Selecting music to use as a dance’s backbone is something that Matthew Neenan does often. His Credo was inspired by Kevin Put’s eponymous composition, and makes use of Haydn selections as well. Neenan’s travels in India last winter also provided creative stimulus for the work. When shown at the Vail International Festival last summer the New York Times found it notable for Neenan’s “intriguing voice.” The fresh choreographic voice of R. Colby Damon is featured on the program as well. Damon, a former BalletX dancer, created On the Mysterious Properties of Light as his first company commission. He reflects on scientific properties of light through movement and spoken text, and aims to convey just how beautiful light can be. As with Neenan, knowing the BalletX dancers so very well means Damon can both challenge them and bring out their dazzling strengths. 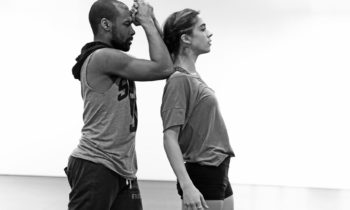 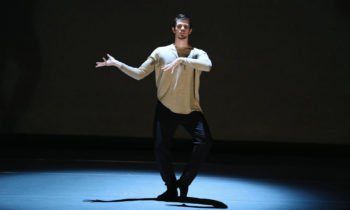