The BalletX dancers were hard at work during their rehearsal with Annabelle Lopez Ochoa on July 10th. When I entered the studio, the large white panels on wheels used in the piece immediately caught my attention. They looked very large and unwieldy, yet the dancers were already maneuvering them effortlessly.

The first section that I witnessed featured Richard, Daniel, Zachary, and Gary. They were each positioned in front of a door, and they were using bowler hats as props. As they performed quirky movement, I was amazed to see that they were already dancing in precise unison. The movement, combined with the music, was reminiscent of vaudeville. Towards the end of the quartet, Edgar snuck behind the panels with the briefcase and then was lifted by the men multiple times. He is a captivating entertainer, and even though it is a rehearsal, he is performing as if he were onstage.

After that section was complete, it was time for Edgar, Gary, and Zachary to learn new choreography. Even from his first time trying out the choreography, Edgar added his own character to the movement. In this section, Ochoa and the dancers experimented with handing Edgar hats from behind the door. They try stacking the bowlers on the briefcase, and some laughter ensued when it did not go quite as planned. Ochoa finally decided that they would balance the hats on Edgar’s shoulders and hands. This proved to be especially difficult because the two men behind the door had no view of where they were placing the headwear.

The dancers of BalletX showed their dedication and camaraderie during this late afternoon rehearsal. While Ochoa was rehearsing the men, the ladies kept busy by practicing pointe work for a different section. Edgar, Zachary, and Gary worked together as a team in order to best achieve Ochoa’s artistic vision. Throughout the rehearsal, the dancers maintained a lightheartedness. 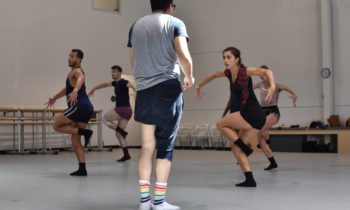 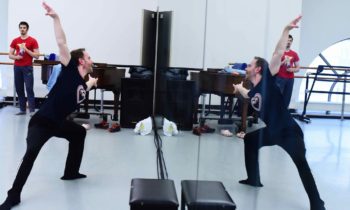